The Shuriken is a flattened piece of metal that usually has four sharp points upon it or a spike, although several variants exist. The art of wielding a shuriken is known as shurikenjustu, which is taught by many samurai schools. Most shuriken are dart-like, which can be crudely crafted.

The Shuriken was not originally designed as a killing weapon, but as a distraction before a fight or escape.

Also called the Shaken, they are the most known and popular form of shuriken, and were made from a variety of sources, such as coins, carpentry tools, spools, and nail removers. They They often have a hole in the center and possess a fairly thin blade sharpened only at the tip. The holes derive from their source in items that had holes – old coins, washers, and nail-removing tools. This proved convenient for the shuriken user, as well, as the weapons could be strung on a string or dowel in the belt for transport, and the hole also had aerodynamic and weighting effects that aided the flight of the blade after it was thrown.

Bo-shuriken are throwing weapons consisting of a straight, iron or steel spike, usually four-sided but sometimes round or octagonal in shape. The bo-shuriken can be thrown in a number of ways, such as overhead, underarm, sideways and rearwards, but in each case, the throw involved the blade sliding out of the hand through the fingers in a smooth, controlled flight. 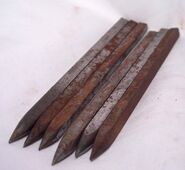 Stylized versions of the Hira Shuriken.
Community content is available under CC-BY-SA unless otherwise noted.
Advertisement